Despite the disheartening end to the 2018 – 2019 campaign. The San Jose Sharks assistant captain Logan Couture discreetly put together the best season of hockey in his career.

Logan Couture got drafted 9th overall in 2007 by the San Jose Sharks. He has been a constant presence on Team Teal for a decade now and has consistently stepped up in big moments during his entire career and this year was more of the same.

The 30-year-old eclipsed 70 points for the first time in a decade of NHL hockey. This statement might come as a surprise to some, but Logan Couture’s misfortune when it comes to injuries has really hampered his ability to stay on the ice. This was only the 2nd time that he’s suited up in at least 80 games for the San Jose Sharks since his debut in 2009 – 2010.

The lifetime member of Team Teal put together an extraordinary season compiling 27 goals and 43 assists, with 26 of them being considered primary. Couture was one of the five members of Team Teal with at least 25 goals during 2018 –  2019.

The Ontario native carried his strong play on offense into the post season scoring 14 goals, registering 20 total points in 20 Stanley Cup Playoff games. He ended his postseason run with 48 total goals. That puts him in some elite company during this decade of Stanley Cup Playoff Hockey. He trails only Alexander Ovechkin who has 50 goals during that same amount of time.

His offense cannot be understated especially when your name gets brought up in the same conversation as the greatest scorer of this generation. However Logan Couture’s abilities in the other two zones is where his value really lies for the San Jose Sharks.

Couture is the prototypical “200-foot-player”. His strong skating, disciplined stick, and ability to sense the flow of the game makes him a match-up nightmare for opposing teams top forward groups. This level of intensity didn’t fade away during the post season. It was evident in Round 2 versus the Avalanche that Cooch (and Vlasic) made things difficult for superstar skater Nathan MacKinnon.

Even during the course of the regular season the 10 year pro was consistently tasked with the difficult defensive assignments for the San Jose Sharks. According to PuckIQ Logan Couture spent the 2nd most minutes against “elite” competition last year among forwards, with line mate Timo Meier outpacing Cooch by only a little over 14 total minutes.

Not only was he matched up against the opponents best during the crucial moments of the game, Couture was consistently buried outside the offensive zone. San Jose Sharks coach Pete DeBoer started his Selke caliber forward outside of the offensive zone over 70% of the time at 5v5, per Corsica.Hockey.

On the surface this isn’t that overtly impressive, but pairing it with the San Jose Sharks dominate possession metrics throughout the regular season which at times nearly reached a 60/40 split in almost every shot share category. For a little more context we can turn to Micah Blake McCurdry’s HockeyViz shift start location tool. 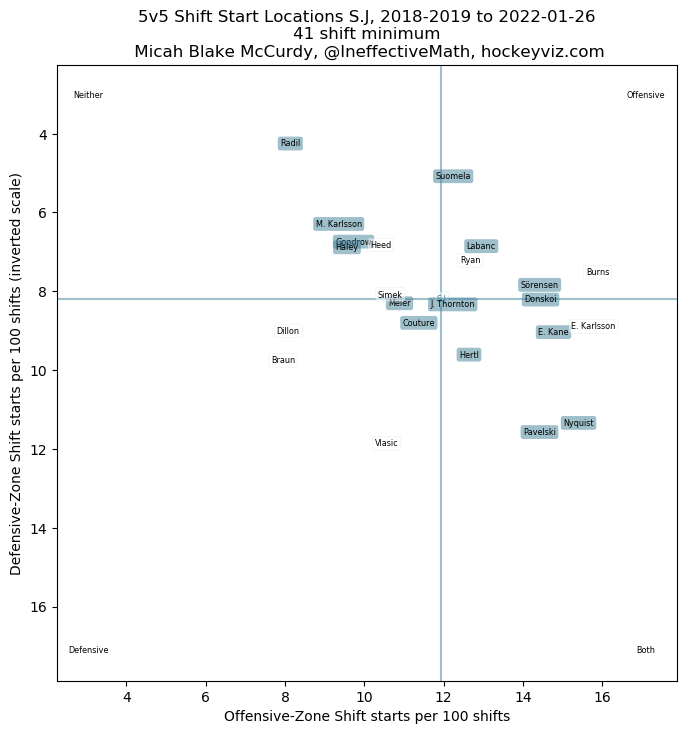 This visual is a good representation of how DeBoer likes to sort out his defensive assignments. Not surprisingly Couture and Meier are the only two forwards inside the defensive quadrant. Typically the Sharks are comfortable rolling all 4 line formations during the course of a game. However when the score is close and things get tight the Sharks bench boss relies heavily on his assistant captain to make stops.

As cliché as it sounds Logan Couture can best be described as a Swiss army knife, a skater that has every tool necessary to stay successful in the NHL. This along with his offensive upside was a major reason as to why the San Jose Sharks extended Cooch to an 8 year 8 million dollar deal on July 1st 2018, per CapFriendly.

There was some initial skepticism from some members of Sharks Territory after the signing. But if this year is any indication of what we will be seeing from Couture Team Teal should feel confident in their commitment to the 30-year-old. The only area of concern would be whether Couture can stay healthy and on the ice. Otherwise it’s difficult to argue that he won’t one of the most important skaters in a Teal sweater for years to come.

Regardless of the disappointing outcome for the San Jose Sharks, Cooch put together 8 months of world-class hockey. He has shown that as long as he can stay on the ice he is an extremely effective skater in all 3 zones with the box score and underlying numbers backing that sentiment in full.

Nevertheless Logan Couture isn’t satisfied with  eye popping stats and playoff accolades. It’s obvious that the only thing that drives the veteran center is another shot at the Stanley Cup. Anticipate the lifetime Shark to find ways to elevate his game during the off-season in preparation for what is hopefully another long season and a shot at the ultimate prize.