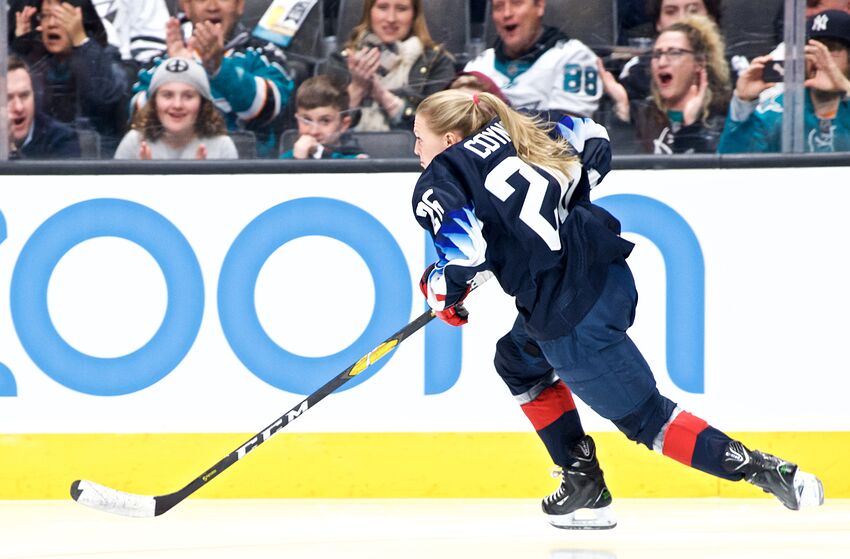 After successfully hosting the 2019 All Star the San Jose Sharks organization turns its attention to the annual Fan Fest on Sept. 22. This year it’s expected to include some of the top-tier players that make up a part of the Professional Women’s Hockey Players Association.

Capping off the day’s festivities will be a Sharks “Legends” game between the skaters participating in the PWHPA Dream Gap Tour and San Jose alumni. The legends include the likes of Jamie Baker, Douglas Murray, Devin Setoguchi, Jeff Friesen, Scott Hannan, Bryan Marchment and others.

Headlining the list of talented skaters involved in the Dream Gap Tour is Kendall Coyne Schofield (@KendallCoyne) who stole the show at 2019 NHL Skills Competition.  Where she clocked a blazing 14.346 in the fastest skater contest as a substitute for the injured Nathan MacKinnon.

To go along with this Team Teal invited Coyne Schofield to open the doors prior to Game 5 of Round Two of the Stanley Cup Playoffs versus the Colorado Avalanche. She has definitely been feeling the love from the Sharks organization with her mentioning Team Teal’s hospitality in a statement attached to the Fan Fest announcement.

“Ever since the fastest skater competition at the Shark Tank in January, I have felt like a member of the Sharks family and I can’t wait to get back to the San Jose community with 15 of my other teammates.”

The Dream Gap Tour’s mission is to attract more young women to hockey and exhibit that despite the lack of coverage/financial support they continue to play this game at an elite level.

.@SharksAlumni vs. the @PWHPA. It’s going to be epic.

The alumni game will like likely cap off a day full of events like meet and greets players/coaches from both the Sharks and Barracuda. Accompanying this will be a Q & A, autograph session, open practice, and plenty more activities lined up to keep your attention until the “Legends” game nightcap.

With the regular season fast approaching the Fan Fest is here to get Sharks Territory prepared for the perils of a long yet exciting year. Make sure you head out to the SAP Center on Sept. 22nd to catch a glimpse of the festivities that will help usher in the 2019 – 2020 campaign.