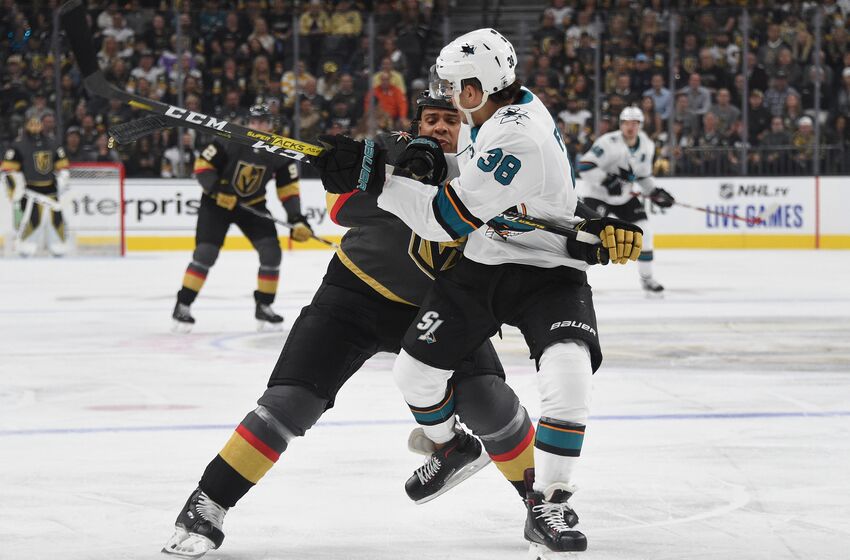 The under manned San Jose Sharks fall to their biggest rival the Vegas Golden Knights 4 – 1 on opening night.

The San Jose Sharks were severely outmatched entering this one. Not only were they missing Evander Kane due to his 3 game suspension. It got announced just moments prior to puck drop that Erik Karlsson would not be suiting up due to a personal matter. Nevertheless, the game must go on and it did with the Sharks struggling mightily the entire night against a fully stacked deck.

After surrendering two early goals the Sharks settled things down and bit. They responded with a Marcus Sorensen goal and some excellent stops by Martin Jones.  Despite the valiant effort by Jones the Sharks faltered and are now staring down what could be a must win versus the Knights on Friday. With only four games against their biggest rival this season every match-up counts when it comes to the eventual seeding in the Pacific division.

It might not have been pretty or the outcome we envisioned but there still plenty to gain from this 4 – 1 reality check of a loss. Here are a few things to keep in mind heading into the rematch at SAP Center this Friday night.

After a summer filled with negative publicity surrounding Martin Jones future with this organization. The 29-year-old netminder stood strong against the onslaught of Vegas Golden Knights. Jones faced 35 shots and made 31 saves ending the night with a .886 save percentage, but that doesn’t tell the story.

Not once, but TWICE.

Jones made countless spectacular saves all throughout this one to keep this out manned Sharks roster a float. Despite the loss it’s very refreshing to see the netminder look calm and collected in his net, especially after his abysmal stretch of play last year.

An hour before the puck got dropped on opening night the news about Erik Karlsson’s scratch made its way around the news sphere. An overwhelming sense of dread blanketed Sharks fans with them knowing that this team has little chance of beating Vegas without both of their EK’s.

Now we’ll have to wait and see whether this a serious issue. If so the Sharks will be searching for answers yet again, however this time on the blueline. Besides all this it’s most important that everything is okay with Karlsson and the personal manners he is dealing with.

Pros: The Kids are Alright

The Sharks were planning on icing their rookie skaters tonight regardless of the absences of the EK’s and despite it being a highly pressurized scenario the kids played alright. But you wouldn’t have known that if you asked Coach Pete DeBoer. Sheng Peng of Fear the Fin caught up with the coach post game and asked about the rookies performances.

DeBoer, on performance of rookies Ferraro, Yurtaykin & Bergmann: “What did you think? No one really looked good for us. Other than Jonesy.”

Whether DeBoer means this or not judging by the tape and the box score the rookies performed admirably. Lean Bergmann brought the physicality and drew a penalty. And it’s ultimately tough to judge how well he did offensively considering his lack of chemistry with Hertl.

Danil Yurtaykin was one of the only noticeable Sharks on the ice. The 22-year-old never stopped moving his feet and quick hands. He exhibited a level grit that was sorely needed against this Vegas Golden Knights squad.

Finally rounding out this group of rookies is Mario Ferraro. The 21-year-old logged 18:08 minutes of ice time. Despite a few mistakes he continued to play aggressively by joining the rush and attacking the net. In the post game interview DeBoer slammed everybody for their performances. However when he goes back to the tape he will notice that it was really his veteran skaters who weren’t ready to play.

This is starting to become a trend that has carried over from last years regular season. The Sharks once again came out of the gate sluggish, which is surprising considering they were up against their biggest rival. Per usual Martin Jones gave up a goal on the first shot of a home opener, but honestly the Sharks really didn’t give him much to work with defensively.

This pattern will continue to plague San Jose unless something changes. They’ll likely have a little more trouble playing from behind this year when you take into account the amount of scoring they lost this off-season. It’s crucial that they establish their teams defensive structure early to help Jones see pucks through screens and shooting lanes.

Want your voice heard? Join the Blades Of Teal team!

With Bob Boughner bringing back his style of play on the blueline it might take a bit for the skaters to get adjusted to new system. Regardless the switch isn’t much of an excuse for players as talented as Marc-Edouard Vlasic, Brent Burns, and eventually Erik Karlsson.

Cons: Health of Meier and Labanc

Both skaters exited Wednesday’s game in the 3rd period. The San Jose Sharks provided no update on their health, but Kevin Labanc left because he got a stick to the face. Just prior to that Timo Meier was screening the net and took a Labanc shot to the chest or possibly hand. We’ll keep you up to date when more information comes out about this manner.

Overall the Sharks didn’t embarrass themselves all that much when you take into account the circumstances at play. Besides we won’t have to wait long for rematch, considering the Golden Knights are heading to the Bay Area on Friday night for part 2.