The San Jose Sharks are slumping into their first road trip of the 2019 – 2020 campaign. Can Team Teal turn it around away from their friendly confines?

After two lackluster performances to kick off the year against the Vegas Golden Knights. The San Jose Sharks look to regroup themselves prior to their first road trip of a very long season. But with two extremely messy hockey games to sort through where do they even begin?

Well they can start in their defensive zone specifically in front of their goalkeeper. “The house” in the world of hockey is roughly described as the area of ice directly in front of the netminder that extends out to encompass both points.

The Sharks have struggled mightily controlling this area of the ice in both zones, but most importantly on the defensive end. According to naturalstattrick the Sharks have allowed 24 high danger scoring chances at even strength in their first two contests of the season but have only generated 14 of their own.

In their first two match-up’s versus Vegas the Sharks barely made Marc-Andre Fluery break a sweat.  Meanwhile Martin Jones (and eventually Aaron Dell)  had to deal with an onslaught of odd man rushes, power play chances, and shots in the slot. Regardless of who you put between the pipes it’s nearly impossible for anyone to react to pucks with the defensive structure constantly crumbling in front of them.

Using Micah Blake McCurdy’s Hockey visualization tool we can see how the Knights in Game 2 were essentially teeing off on the Sharks when they entered “the house” at even strength. 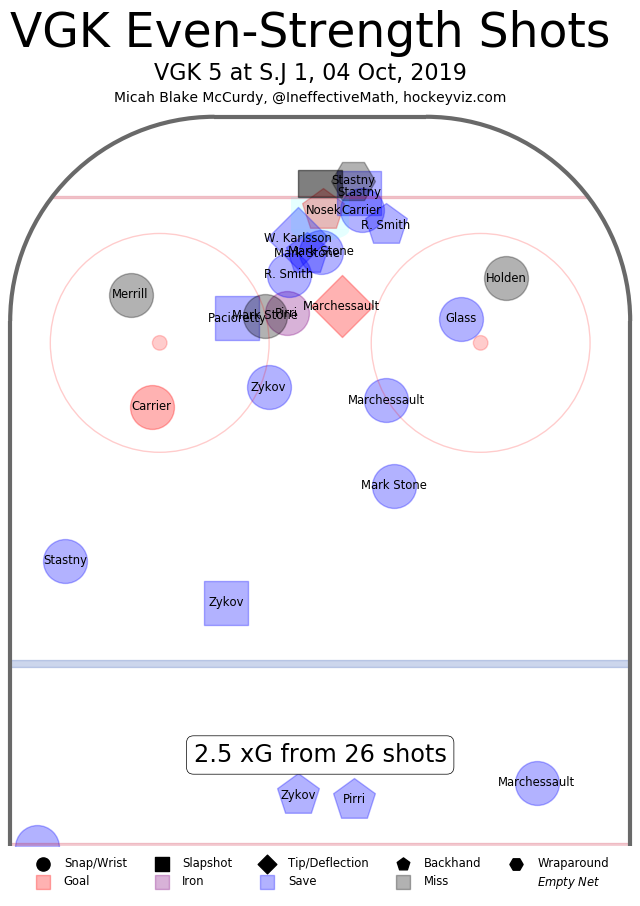 If San Jose wants to get things going as a team it’ll have to start in the defensive zone in front of netminder. They’ll need to focus on getting the puck out quickly with smart first passes while also keeping the it away from the mouth of the net.

This task was easier in theory then in actual practice against the Golden Knights, but if the Sharks want to generate any sense of momentum heading into this three game road trip they’ll need to play much more consciously in their own end of the ice.

All this information might seem like a no brainer, but judging by the state of Sharks at the moment they actually do need to focus more on controlling their own zone. This will allow San Jose’s talented skaters the time necessary to work on trekking the puck through the neutral areas of the ice for hopefully some persistent offensive zone pressure.

Who Should Take the Face-offs on the Sharks?

Now all of this is essentially for nothing if Team Teal continues to give opponents power play opportunities. The Sharks  face-off against the Ducks, Predators, and Blackhawks in the coming days. They’ll need to recalculate and recompose themselves if they want to make it through this tough stretch of games on the road in the early goings of what is a make or break season.